"Now there was a man named Joseph, from the Jewish town of Arimathea. He was a member of the council, a good and righteous man, who had not consented to their decision and action; and he was looking for the kingdom of God." - Luke 23:50-51

Have you ever considered the minority reports of the Bible? You will find Joshua and Caleb among the distressed spies, David among a frightened Saul and his army, Jeremiah among misleading prophets and Daniel among jealous peers. These were lone voices in an ocean of resistance when the easy road would choose passive agreement. Yet, we remember these men, not necessary for moving mountains, but for standing their ground in the face of opposition.
Joseph of Arimathea was one of those minority voices among the Jewish council members. He didn't have the sway or support to move the group away from crucifixion. But he wasn't about to be moved away from his personal convictions. He had not consented to the decision and he was now courageous enough to care for the dead body of Jesus. He couldn't move mountains, but he stood his ground and made a difference.
When you are pressed by the majority and still have strong convictions, what do you do my friend? Are you willing to speak up and sacrifice for what you know is right? Or do you cave under the pressure of the crowd? While you may never move mountains, you can certainly stand your ground for Jesus; and that will make all the difference in the world. 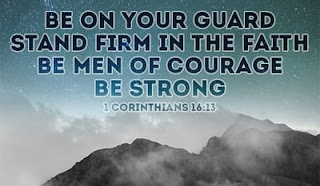