"When Jesus had spoken these words, he went out with his disciples across the Kidron Valley, where there was a garden, which he and his disciples entered. Now Judas, who betrayed him, also knew the place, for Jesus often met there with his disciples. So Judas, having procured a band of soldiers and some officers from the chief priests and the Pharisees, went there with lanterns and torches and weapons. Then Jesus, knowing all that would happen to him, came forward..." - John 18:1-4

It was a morning not unlike this morning. Some were still sleeping and others were having breakfast, preparing to attend church. They were at peace on an island that God blessed with beauty and tranquility. Then, at 7:51 the peace was broken and in a very short time 2,350 souls would enter eternity. War had come to Pearl Harbor and the world would never be the same again.
Spiritual warfare will often come to us in the same way. We are in the olive grove with the Lord and all is calm. And then the enemy comes with a detachment of soldiers. We are surprised, but Jesus is not, because he always knows what is going to happen and is prepared. Peace may be shaken, but the protective care of Jesus is always fulfilled:  “I have not lost one of those you gave me.”﻿ (vs. 9)
We can never hide from spiritual battles; they will even come to us in the olive grove. But unlike Pearl Harbor, we have a Savior who stands between us and defeat. He tasted death for us, that we might have everlasting victory. Put your battles in the hands of Jesus and your world will never be the same again. 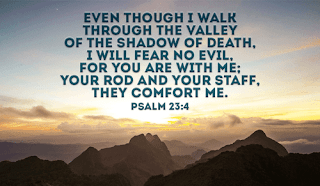