"So I will show my greatness and my holiness and make myself known in the eyes of many nations. Then they will know that I am the LORD." - Ezekiel 38:23

On Christmas Eve, 1914, just five months after the outbreak of war in Europe, a most unusual event took place. British and German troops began singing Christmas carols to each other across the battle lines. In the early hours of Christmas morning, German soldiers left their trenches and came over the British troops to wish them a Merry Christmas. The event was the last of it's kind to occur during the war, but for a moment in time the world knew the reality of God.
In a very different way, the Lord's dealing with the enemies of Israel was intended to bear witness of a great and holy God who alone was the LORD.  This message was being sent to a world lost in a quagmire of dominance and war. The Lord was dealing with every nation under heaven to draw attention to Himself as the only answer for mankind. In the midst of turmoil and confusion He set His glory and justice before them, that they might know the reality of God.
Why did the Lord leave the disciples behind when he ascended into heaven? Why has there been the presence of God's people in every generation and country? Whether during war or peace, in wealth or poverty, in city or jungle, God has had a witness. Was that witness intended to only build churches, hospitals or other ministries? Or was it to achieve something greater? The living testimony of God's people has always been intended for the world to know the reality of God. 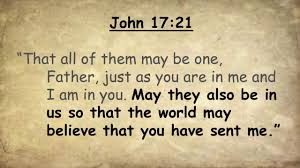