On the morning of December 7, 1941, a radar operator on the northern tip of  the Hawaiian island of Oahu reported that there was an unusually large “blip” on the radar screen, indicating a large number of aircraft about 132 miles away and fast approaching. He had no idea that the "blip" was the first wave of more than 180 Japanese fighters, torpedo bombers, dive bombers and horizontal bombers who were bearing down on Pearl Harbor. Once informed, Kermit A. Tyler, Army Air Force first lieutenant on temporary duty at Fort Shafter’s radar information center responded... "Don't worry about it". Beware of those who mislead.
Jeremiah and Ezekiel were prophets of God that proclaimed the truth. That truth called for repentance and major life changes. Their voice was ignored and their message rejected. The voices that were received, spoke of good days ahead and totally failed to warn the people of impending judgment. Danger was closing in like an F5 tornado in the dark of night. The nation was devistated because they listened to false and deceptive messages that said... "Don't worry about it".  Beware of those who mislead.
There is no question that the Lord desires good for His children. But, that good is often waylaid by unrepentant sinful conduct. When we are sin sick, our heavenly Father brings us to a place of confession and spiritual renewal before His blessings rain down on us. Another prophet named Hosea recorded a similar thought, "... it is the time to seek the Lord, that he may come and rain righteousness upon you. (Hosea 10:12) When the Lord speaks to you about sin, listen to Him and ignore the deceptive messages that say... "Don't worry about it". Beware of those who mislead. 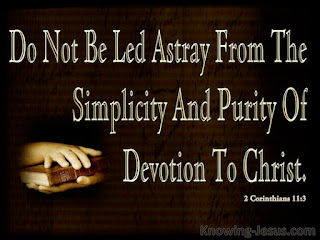