Where do you turn?

"In the year that King Uzziah died I saw the Lord sitting upon a throne, high and lifted up; and the train of his robe filled the temple." - Isaiah 6:1

I was sitting in class on November 22, 1961 when the announcement came over the loadspeaker that President Kennedy had died. The moment was unexpected and quite shocking as a number of students broke down in tears. As the years passed I stood with people of all ages and circumstances, who faced their own shocking and unexpected loss. At that moment, in the midst of confusion and tears, the question haunts... "Where do you turn?"
"The king had died. Uzziah had brought many benefits to the country and had introduced an era of prosperity and peace. But now Judah was without the king." - Edward J. Young, The Book of Isaiah. The nation had suffered a great loss and was drifting into anarchy. For just this time Isaiah was given a reassuring vision of God on his throne, high and lifted up. The answer rode on the clouds in majesty to the haunting question... "Where do we turn?"
The ages have passed, but the King of the ages still reigns, my friend. Has unexpected and shocking loss overwhelmed you? Are you still struggling with the grief and confusion of it all? Are there days when you are just numb to life? Then "be still and know that he is God" (Psalm 46:10), finding hope in the One who is still "high and lifted up" . He will also lift you up in his "Everlasting arms" (Deuteronomy 33:27) so you will never again be haunted by ... "Where do you turn?" 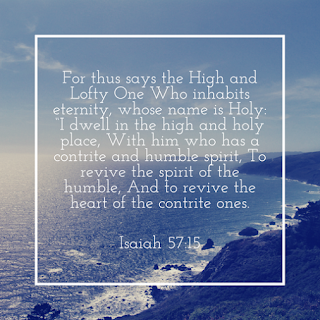